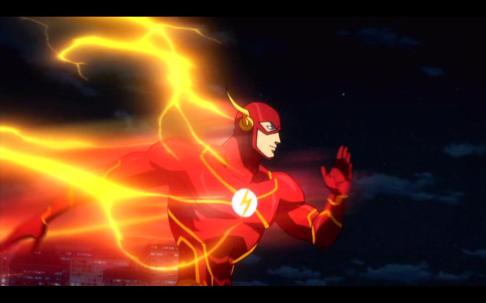 I mentioned to my friend, Jeg that was watching the Flash TV show and he told me about a cartoon version. Flashpoint Paradox happens when the Flash, Barry Allen awakens to a reality that isn’t his own. It was a DC feature that I really enjoyed. (I have heard it said that Marvel does movies well, while DC has the comic thing down to a science.)

Barry Allen AKA the Flash, with the help of the other members of the Justice League, battling his nemesis The Reverse Flash. Working together they manage to subdue him and his gang of thugs. However, in their on-going battle, the Reverse Flash promises that he will have the final victory over Barry. The next morning Barry wakes to a world that has changed.  Barry got something he always wanted, his murdered mother was still alive. However, everything else was changed around him because of this altered event in the timeline. This change included the rest of the Justice League and the world. He remembers what should have happened, but no one else does.

Batman isn’t Bruce Wayne. He was killed instead of his mother and father. They lived and his father, Thomas became a cruel vindictive version of Batman while his mother overcome by grief went mad and became the Joker. There are many other examples of radically different lives set off like a line on dominoes because one small event turned out different. Barry saw one good well-intentioned deed done to save a person’s life. However, what he didn’t see was how his life and actions were connected with the rest of the world, good, evil, and indifferent. Barry’s eyes were finally open, through loss and tear.  Everything that happens has purpose when knitted together in the magnificent fabric of time.

Hindsight and regret can be two lenses on the same set of glasses. Who wouldn’t wish for a chance to undo the past? I wonder what would happen if we let the past go and take the lessons learned as a catalyst for the present? Can we accept the things we can’t change, treasure the memories we have made, and understand all things work together for our good? Hm, that sounds very Biblical and applicable, doesn’t it?