This is a piece that has been marinating for a while. We as a fandom community have been showered with movies and TV productions from many hard-working and creative individuals. When we think of our heroes or villains caught up in their epic struggle or finding their destiny, do we ever consider the minds behind the storytelling.

One such man who has been a quiet mover and a consistent shaker creatively speaking is Mr.Jon Favreau. He has been an instrumental part of the success of the Marvel Studio movie franchise by beginning with the Iron Man films. Not only did he direct the first two Iron Man features and produce the Avengers films, but also stared as Tony Stark’s best friend and body guard, Happy Hogan. Happy was character that had a seemingly small role who was actually very pivotal to Tony’s erratic character arc. 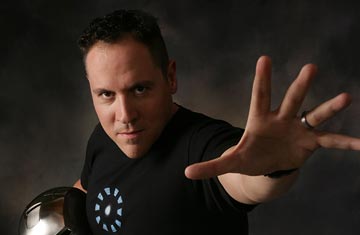 You could say that Happy and Jon fleshed out line between the fictional Marvel Magic and the fans who are captivated by it. He is a fan who has the unique privilege to get to create features in his favorite fandoms. Jon would fall under our Fandom Universe fans who enjoy more than one fandom.

That leads us to Jon’s new venture with Disney and the upcoming Star Wars live action features on Disney Plus. The Mandalorian will be another opportunity for Jon to work alongside other Star Wars fans to tell new tales in the classic vein of the galaxy far far away.  Mr. Favreau, thank you for being a film maker who unlike a Federation Captain becoming  an Admiral, remembers what it is to still be an excited fan. Never loose that connection to your audience while sitting in the director’s chair. Our thoughts, prayers, and encouragement go out to you, brother.