Welcome back to land of Neeks.

Who are Neeks? You know who they are. These are the people in your life who stand out from the crowd, or quietly blend in behind the scenes. Neeks are creative, curious, calculating, (as in Math), and constructive people who are often labeled as nerds and geeks.

Peter Parker walks among fellow Neeks in his high school in Queens. In Spider-Man Homecoming we are privy to Peter as a classic NEEK who’s been in the school band, immersed up to his elbows in his science classes , and is a force of knowledge in the school’s Academic Decathlon or AcaDec.

There we meet the team captain, Michelle, who is every teen NEEK’s dream girl including Mr. Parker, because she is beauty and the brains.

MJ is a witty sarcastic NEEK who loves to keep Peter and Ned grounded in the reality of life around them. 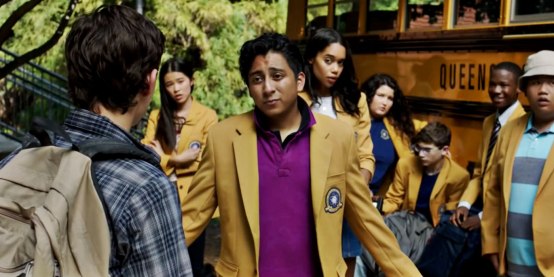 Don’t forget Flash. Where would a NEEK be without a nemesis to challenge their resolve and character?  Throughout Peter’s story we are given moments of neekiesss with comments, looks, and interactions with a wide variety of students on campus. Though we do see the jocks, the hipsters, and other groups of teens at school, the NEEKS appear to be the stars of the show. In this moment, it is cool to be a nerd.

If this often misunderstood group really knew who Peter Parker really was I bet there would rise a collect cheer for the underdog.  “Spider-man is a NEEK like me? Hooozahh!  So many nerds and geeks have suffered the outrageous slings and arrows of misfortune throughout history. People tended to shy away from the nerdy odd guy with the out-of-the-box ideas. The status quo says, “Whoa, what?” Or the geeky girl who has her own style or thought on a topic that is considered male only. The labels get torn out, thrown around and try to stick on tight. So, hoorah for those Neeks who are changing the world around them. They may not need a spandex outfit to fight the cause they have embraced, rather have the courage to face the world with just a little hope, a heart of love, and the wisdom to take a step of faith.

I am very honored to say I have helped raised a family of Neeks. John and Ryan, my two step sons were two little glasses-wearing, Lego-loving, Sci-Fi and fantasy book and movie watching boys. Seeing Peter and Ned on the AcaDec reminds me of the boys teen aged years at Hemet High.  I was so proud to see them rise from hiding their brains and using their talents and gifts for good things.

They inspired their creative writing, performance, communicator, younger sister, Autumn. She saw that being a female NEEK is something to wear proudly (yet humbly) and be able to honor God. I am also thankful for my wife, Laura who understands who are and still loves us, quirks, nerdy hobbies, temperaments, and all.

If I didn’t have her support I wouldn’t be seeing my first Sci-if novel, Chronolocity coming out and you wouldn’t be reading this blog dedicated to encourage Neeks and build up their faith. So, just like Lucille Ball taking a chance and getting Star Trek on the air, she knows her Neeks need to do what they feel called to do.  If God has blessed you with a NEEK or two2, enjoy the journey with them. Who knows, maybe you will find out there is a little curious bit of NEEK in you that is waiting for a chance to shine out in a tired a weary world.