Dr. Stephen Strange was a man who believed in the here and now. He was a hands on guy who was grounded in the material world. In the good doctor’s perspective for things to exist in real time, they had to be tangible and explainable.

When his grasp on the tangible became scarred and twisted, Dr. Strange came into contact with the intangible. The Ancient One began to talk to the good doctor about the unseen world of the spirit. Stephen growled in anger. He shoved aside a believe that the spirit world existed and this encounter was wasting his precious time. With one well-placed push, the Ancient One, opened a door for the doctor to see into that “non-existence” experience. In a wild and fantastic moment, Dr. Stephen Strange became aware of what wonders the unseen had in store.

“Surrender, Stephen,” the Ancient one employed the hesitant doctor.

If he did that then he would be ready to understand the purpose of his mystical voyage. The spirit world shook him to his core. (Any Marvel fans can see that Dr. Strange’s moment in the multiverse opens up possibilities that expand the stories that will soon be told.) When Dr. Strange opened himself up to the impossibilities, anything became a reality. 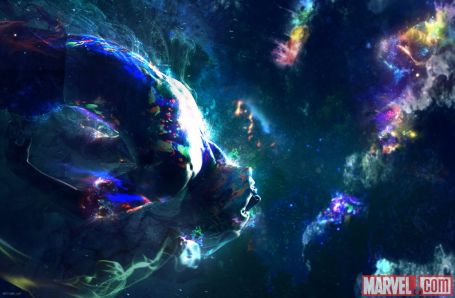 This story opened up many practical down-to-earth people to consider an out-of-this-world-eternity. Think about all the struggles and trials we face on this little material world. If this was it without hope of Heaven and eternity, it would be a miserable existence. However, when we surrender to the truth of God’s nudging in our spirit, hope stirs in us. Maybe all the unimportant things in our tiny hands fade and we see a greater purpose that physical hands can’t grasp. Joyfully, though, our spirits can soar right through!  (Today has been one of those days when I have to remember we are just pilgrims passing through and better things are waiting for us out there. I needed hear this message myself.) In a greater way the ordinary stuff of earth is radically and forever changed when God’s Spirit has a chance to touch where it is needed the most.