Remence is going before the Hand.  How will they react?  What will their decision be?  The conclusion of Chapter 3.

The five council members, including his father, sat upon a dais. They each sat in a wooden chair carved out of strong oak with animal skins placed upon the seats to make them more comfortable. The hall was packed. The entire village had come out to hear Remence’s tale.

Mand, the ostensible leader of The Hand, sat in the center chair. He silenced the hall and bade Remence stand before the five. Remence walked forward, head hung low. Even though he did not make eye contact with anyone, he could feel the weight of their stares. Once he took the floor, he looked around at his entire village. A feeling of trepidation came over him, and his stomach felt as if it were tying itself in knots.

“Tell us what you have discovered, young Remence,” prompted Mand.

Remence’s mind went blank as he started to speak. He became tongue tied and looked down in shame.

“Do you not have a tale to tell?” Mand asked, giving Remence the right to address the council.

There was a long silence. Remence looked up, and when he did, his eyes met his father’s. In those eyes, he saw strength, and he drew from that well. Remence drank in a deep breath and inhaled his confidence. His father nodded his approval, and with that nod was his encouragement to Remence.

His fear evaporated, replaced with conviction. With his poise returned, Remence retold his tale in full. When he finished, many looked at him with raised eyebrows, arms crossed, and faces that bespoke doubt.

Mand was the first to voice what the others seemed to be thinking. “Young Remence has to be mistaken. I mean, that many? All the region’s tribes working together? It is unheard of. In all my many years, it has never happened. It has to be an error. It just has to be.” His vehemence was laid bare at the end.

“But I’m telling you as it is. In the name of Clovina, you must listen, or we are all doomed!” urged Remence.

“Don’t get us wrong, young Remence, nor you, Kael,” Jarden said as he glanced at Remence’s father. “Your boy has never been known to be fanciful in his tales, yet what he speaks of is hard to imagine. Mand has a point. We have lived here on the Dacturn plains our entire lives, and our fathers before us, and never have we seen, nor heard a tale such as the one that has been told to the council today. And, we are many winters,” opined Jarden.

Gromken’s adoptive father, Grok, spoke. His voice was intense and commanding, and it resonated from the depths of his soul. It was self-assured and smooth, matching his outward appearance, that of a hulking man who had visible scars. His hair and beard were now interwoven with the gray of age. He garnered great respect from all in the village because of his battle prowess and his years of wisdom. The entire village seemed to stand a little taller and listen a bit more intently when he spoke.

“I would normally have to side with Jarden and Mand in their view of the situation,” started Grok. “Except I am a warrior, an old warrior, and I’ve battled orc-kind more often than I care to remember. I understand the way of the orc, probably better than most. Mand’s point is acceptable and true. He has never seen orc tribes band together, but that doesn’t mean it has not occurred. The orcs can be a greedy, violent band of creatures and will supplicate themselves to the strong, especially if it appears to provide them gain, as has happened in the past.

“My grandfather had told me tales of tribes uniting. Usually to fight other tribes or a stronger tribe. Now, I have never heard of this type of behavior on the scale that young Remence describes, but I have heard of it. I would tend to agree with Jarden and Mand, yet young Remence has always been prone to honesty and is of sound mind. I have personal experience with him, as he and my son have grown together. I believe that we should at least send a scouting party to confirm Remence’s assessment. In the meantime, we should prepare our defenses.”

Jarden stood, and in a dismissive tone, as if all of it was absurd, argued, “I for one, believe the tale to be a bit fanciful. I vote that we ignore the entire situation as a child’s distorted view of the world. But I would not be offended if we sent a scouting party, as Grok has suggested. What say the council?”

“I agree with Grok,” answered Mand. “He is the most well-versed on orc-kind and nearly the eldest of all on the council. And, although I think that young Remence is probably just mistaken, it cannot hurt to discover the accuracy of his tale. I vote to send a tracking party out to assess a threat, if it exists. It is better to know of a threat and be prepared rather than to simply ignore it.”

Jarden responded, as he looked at the other two. “And the rest?”

Falen hesitated. “I agree with Grok’s idea, and I think it to be the most prudent, considering his experience.” He paused, then added, “If there is any evidence to suggest that the orcs are even a fraction of the size of the force Remence has described, I’m with the lad.”

“Kael?” scoffed Jarden, as if he already knew his answer.

“My son saw what he saw. I stand by his word. I vote that we flee. Immediately, as he has counseled.”

“Brothers. Sisters. You have heard The Hand’s counsel. What say you?” Mand, inquired of the people.

Nearly the whole village was in accord with Grok, and the other three council members’ votes.

When he heard the decision, Remence pleaded with the council. “Please. We mustn’t stall. This army will be upon us within two days. We cannot afford to scout! I mean no disrespect, but if we delay, if we take the time to scout, we will be hard pressed to get to the Gate.”

“The council has decided, young Remence. The village has decided,” reprimanded Grok. “I have even shown you my support. I think that you are correct, there is a threat, but we are more of the mind to fight as opposed to flee.”

Grok pushed himself up from his chair and addressed the village. “We have forty strong warriors here in the village. We should be able to hold off even twice our number, especially if we prepare our defenses.  Orc-kind, even when they band together fight amongst themselves as opposed to acting like a cohesive group.” He turned his attention back to Remence. “That, my young Remence, will work in our favor.”

Remence pleaded with Grok. “You don’t understand, I’m talking about hundreds! Five, six, seven hundred. And, well-armed. This is no rag-tag group. They are organized, and they are heading this way. You heard what I said prior to my fight with the two orcs. They were yelling at one another then calmed. They did not come to blows. These orcs are acting differently. Just the opposite of what you describe.”

Remence then whirled around and implored with the rest of the village. “This group of orcs is cohesive and disciplined. Many tribes who have banded together not to wage war on another tribe, but to wage war on man. They are hell-bent on wiping out the goodly races of Dacturn and Barrondon. No matter what preparations we make, no matter how strong our fighters, we will be overrun. Please. You must listen. We have to flee!”

“The council has spoken. Four to one. We will do it Grok’s way, and there will be no more debate,” Jarden said with a finality, putting an end to Remence’s pleadings. 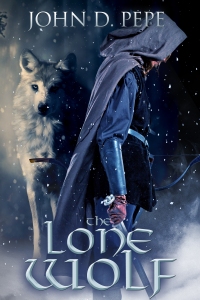 Well. There it is. The Hand decided against Remence.  What will happen? You can find out in a few weeks when I post Chapter 5.  But first we will be jumping back into the lives of our Rogues: Caladin and Quinn with Chapter 4 coming out next.  Let me know what you think by going to my website: johndpepeauthor.com, emailing me at johndpepeauthor@gmail.com, or simply posting a comment here at godamonggeeks316.com.  Don’t forget the book should be available for pre-order in about a month.