With a tribute to the Fiction’s Fearless Females,  I wanted to share my pick for a heroine who knows how to bide her time until her time arises she sprouts her wings and fly. Usually the best characters are waiting in the wings while other heavy-hitters are in the heat of battle. When Hope Van Dyne’s time came, she showed heroes how to get the job done with own brand of Marvel-ous.

Evangeline Lilly dons the role of Hope VanDyne AKA The Wasp. A unique name for a very memorable actress. I first discovered Evangeline as Kate in the JJ Abrams runaway hit LOST. She brought a tough and tender girl next door character into that role who in turn brought out the best in others. So when Evangeline was announced as Hope VanDyne I knew we were going to get a hell of a great character. She always brings honesty, intensity, and just the right feminine vulnerability when she faces what ever challenge that comes her way. 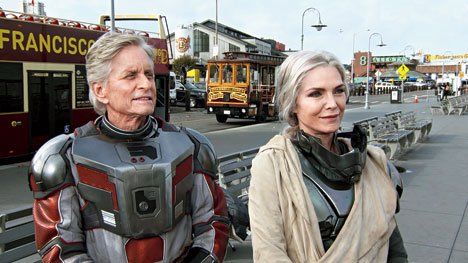 Hope Van Dyne is the daughter of genius inventor of the amazing Pym Particle, Hank Pym and his equally brilliant Quantum expert better half, Janet VanDyne. Both of her parents were both active players in the Cold War years of SHIELD. Of course as the original Antman and the Wasp, her parents secret identities were top secret and they always flew under the intelligence radar. This world of secrets, espionage and heroic role models, hung heavy in the atmosphere that Hope grew up around. Who were her parents really? What was her role in a family of genius scientific, heroic world changers?

Hope’s journey into Marvel lore began with her mother’s supposed death and the mysterious circumstances surrounding it. Despite the distance that separated Hope from her father, she was driven to fight alongside Hank even when they sharply disagreed. Hope is motivated by love even when it means not seeing eye-to-eye with others. She has a great capacity to see the bigger picture more often than not, which allows her to better understand other’s outlook on life.

When Hank could no longer wear the Ant-man suit Hope instantly volunteered. She saw her role first as a hero and not separated in any way by her gender role. In hope she wanted to be an equal parter with father, just as she mother emulated. She dedicated herself to be a hero maybe is a way to honor her mother. Hope learned to look at people before the circumstances they were forced into. A perfect example was her giving ex-con Scott Lang a second chance. Even though Scott Lang was chosen to don the Ant-Man suit instead, she still found a way to be part of the team. Hope knew her time was coming and could patiently (but actively) wait. Hope fights the fight of the overlooked and the underdog. She prepares herself and others on her team to meet the challenges when their time arises.

The truth came out about her Mother’s sacrifice. As the original Wasp,  Janet saved the the US from attack by entering inescapable Quantum Realm. With Scott’s escape from that impossible scenario and a connection with her missing mother, Hope felt her hope revive. Janet was alive! “My mother is alive!” Of course she was the first to volunteer to be her mother’s savior. Even though her father insisted on being the one to find her, Hope’s new role as the Wasp takes flight. When the moment did arrive, Hope didn’t shrink away from the challenge. (Well, she actually shrank to the challenge to meet it as the Wasp.)  Her patience pays off. She and Scott pulled together a team of castaways ( ah, very reminiscent of LOST) underdogs, and ex-cons in order to break her mother out of her 30 year exile in a Quantum Reality prison. As always Hope leads by example, whether with her fists, her smarts, or her passion, she is a force to be reckoned with in her Wasp or full-sized form. Hope’s quick whit and matter of fact attitude, directed at friend or foe, allows her to go toe-toe with the best of them.

Hope could easily take the rains from her male counterparts and get justice done. But she also cares about the lives of those she teams up with. One of her superpowers is her ability to bring out the best in others. Hope shows this by how she compliments Scott in the Ant-man role. Though Hope is the real risk-taker and makes-it-up-as-she-goes leader. However she brings a balance in the gender role and truly displays the true strength of being female. Isn’t that what the males and females do? It’s a match made in Heaven that brings out the best in them both. There is a healthy push and pull, a stirring of the competitive spirit, but never one overpowering the other. Hope puts the hero into a term that should come back, heroine. That timeless word embodies what a female hero should be. Hope VanDyne as my choice of fictional fearless female inspires us all, male and female, to be the best hero and heroine team we can be.

In the spirit of Hope’s spontaneity I just encountered a moment that befits her character. A crazy random moment happened as I am completing this piece. I am on a cruise listening to a trio of very accomplished female violinists playing the song, Happy Together. Really that is what Hope adds to her team and the Marvel team as a whole.  When heroes work out their issues and stand united together there is hope for happiness together.