A few months ago my wife and I discovered a lot of really great shows on Netflix.  Since we both want to travel and trying different cultural dishes, we found show that blended both well. It’s called, “Somebody Feed Phil.” What a simple, personal journey that one man has to discover great food, new locations, and fast friendships.

Phil Rosenthal was one of the writers on the TV series, “Everyone Loves Raymond.” Because of the show he was exposed  to a great slice of the world. That hunger created a PBS show called, “I’ll Have What Phil’s Having.” That led to the series, “Somebody Feed, Phil.”. Phil is very personal and makes visiting a new culture look seamless. Mixing a love for food, travel, and culture is a recipe for success. I have often made two comments while watching Phil travel the globe, “How can I get a gig like that.” And “This show makes me very happy.”

What Phil and his team have created is a positive look at the world in a time when negativity wants to drop a fly in our TV dining. Talk about a family show, he literally has his family as active participants in a number of episodes.

“Come on,” is Phil’s go to word for new discoveries and the joy that accompanies those moments. Just to bring in the whole family he will video conference in his parents in NY. What better way to stay in touch then to keep Mom and Dad in on the action. 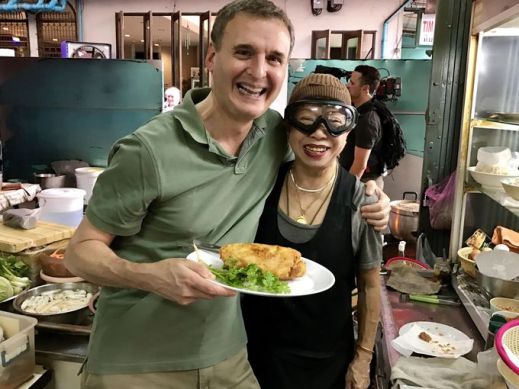 My fellow neek bloggers asked why I chose to talk about travel, food, and Phil on our nerd blog. Well, Phil is a fellow nerd who has found his niche. He has taken his hungry, comedic, extroverted self on the road to bring joy back to traveling. Isn’t that what we are all called to do? Use what God has gifted us with and be a joy and encouragement to others. So, to you Phil I pass on a blessing: May you find the best food, dear friends around the world, and always find something new around every corner of the world. However, never get full, Phil, come on! You know what I mean.